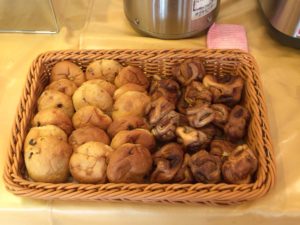 ● What is COCO’S?
A square sign is a landmark! Family restaurant to expand nationwide
COCO’S is a California restaurant born in the United States. In Japan, the first shop opened in 1980.
Initially opened, American style cuisine was offered to our customers,

but we constantly expanded the number of stores while constantly pursuing new menus to meet customer needs.
Today it expands its scale from Hokkaido to Kyushu and is loved by everyone in the whole country.

First of all, the charge is prepaid. Then I will sit down in the vacant seat.

In addition to Japanese and Western foods, you can drink a drink bar as well!

Pan corner
There are 6 types of bread and an oven to warm up.

Rice section
In addition to white rice, there are also mixed rice.
There is preparation of curry.